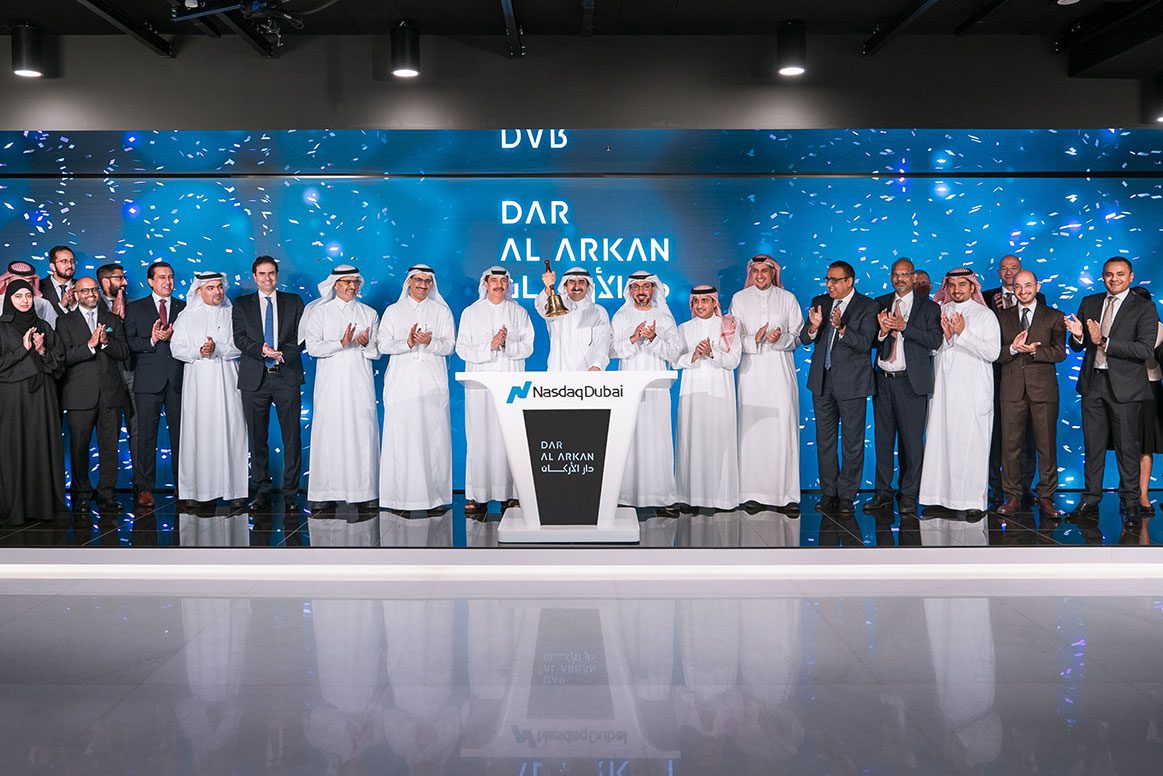 The listing supports the accelerating development activities of Dar Al Arkan, one of the Middle East’s leading real estate developers, including flagship integrated residential communities across Saudi Arabia, as well as its ‘I Love Florence Tower’ in Downtown Dubai. The five-year Sukuk was more than 2.5 times oversubscribed and received significant interest from Middle Eastern, European and Asian investors. It brings Dar Al Arkan’s total Sukuk value listed on Nasdaq Dubai to 1.6 billion US dollars, following listings of two Sukuk’s of 500 million US dollars each in 2017 and 2018.

Yousef Bin Abdullah Al Shelash, Chairman of Dar Al Arkan Real Estate Development Company, said: “With over 1.5 billion US dollars of subscriptions, our latest Sukuk issuance was very well received by the market. It is a testament to our strong relationship with the global debt capital markets and a big vote of confidence from investors in our stewardship of their capital. The funds raised provide us with the capital to dynamically invest in our business activities across Saudi Arabia as we see the market conditions improving and prepare for the next upcycle. As the region’s international exchange, Nasdaq Dubai provides our Sukuk with high visibility to regional and international investors as well as an efficient listing platform regulated to international standards.”

His Excellency Essa Kazim, Governor of DIFC, Secretary General of DIEDC and Chairman of DFM, said: “Dar Al Arkan’s new listing further strengthens the close Islamic capital markets ties between the UAE and Saudi Arabia, which greatly benefit issuers, investors and the wider economy.  We will continue to develop our relationships with Sharia’a-compliant entities across the GCC to underpin Dubai’s expansion as the global Capital of Islamic Economy under the initiative launched by His Highness Sheikh Mohammed Bin Rashid Al Maktoum, the Vice President and Prime Minister of the UAE and Ruler of Dubai.”

MSCI added Dar Al Arkan to its Emerging Markets Index following Saudi Arabia’s inclusion in the index in May 2019. Dar Al Arkan was also one of 12 Saudi-listed companies on which Nasdaq Dubai launched futures contracts in January 2019. Abdul Wahed Al Fahim, Chairman of Nasdaq Dubai, said: “We are delighted to deepen our relationship with one of the Middle East’s largest real estate developers and its diverse Sukuk investors.  This listing underlines the increasing success of Nasdaq Dubai’s strategy of attracting high quality issuers of Sukuk across a wide range of industry sectors.”

Dar Al Arkan’s assets include about 12.4 million square meters of projects under development. The company has handed over 15,000 residential units in Saudi Arabia and holds a land bank with a book value of circa 17 billion Saudi riyals. Hamed Ali, Chief Executive of Nasdaq Dubai, said: “Our comprehensive exchange infrastructure including our post-listing services is positioned to support Dar Al Arkan as it pursues its real estate strategy for the benefit of businesses and individuals. We are preparing to expand our support for the capital raising needs of a range of issuers in Saudi Arabia and other regional and international countries.”

The company’s latest Sukuk underlines Dubai’s role as one of the largest global centres for Sukuk listings by value with a current total of 64.3 billion US dollars. UAE issuers account for 45% of these by value and 55% are from issuers based in other countries. Dar Al Arkan’s latest Sukuk listing on Nasdaq Dubai took place on October 16th, 2019.